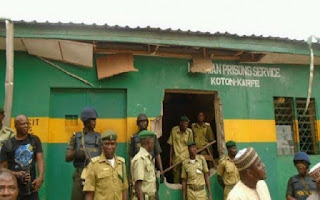 Pandemonium broke out on Thursday morning in Keffi prison when over 50 prisoners allegedly attempted to escape from the prison to protest over poor feeding and lack of facilities. It was gathered that the situation was brought under control by the prompt intervention of the police and prison officials

It was gathered that, apart from the poor hygienic conditions, the Keffi inmates lack access to proper medical attention. It was also alleged that they were only given a sachet of pure water each as breakfast.

It was also learnt that the inmates are denied good night’s sleep, due to overcrowding. The public relations officer of Nasarawa state command of the Nigerian Prison Service Mr Abene Stephen said it is a normal agitation in the prison but the situation was brought under control. The state comptroller of prisons, Mr Emmanuel Okoro refused to respond to the allegations of poor feeding and lack of facilities in his command.