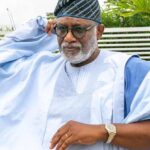 Ayodele said; “Rotimi Akeredolu will not win Ondo election except through manipulations and technicality.”

“He must not underrate anybody, the candidate of the PDP, Eyitayo Jegede and ZLP, Agboola Ajayi are out to beat him. He needs to be careful because he will be betrayed, there are moles in his camp.”

“The people of Ondo state have rejected Akeredolu, no matter the crowd he has now, they won’t give him victory except he manipulate.”

“Akeredolu should wake up, strategize and right his wrongs if he wants to win or else, he will lose gallantly except through manipulations.”

For those who don’t know, Primate Ayodele’s prophecies on the outcome of the Edo election has come to pass as Governor Godwin Obaseki has been re-elected as the governor of the state under the platform of the Peoples Democratic Party (PDP).