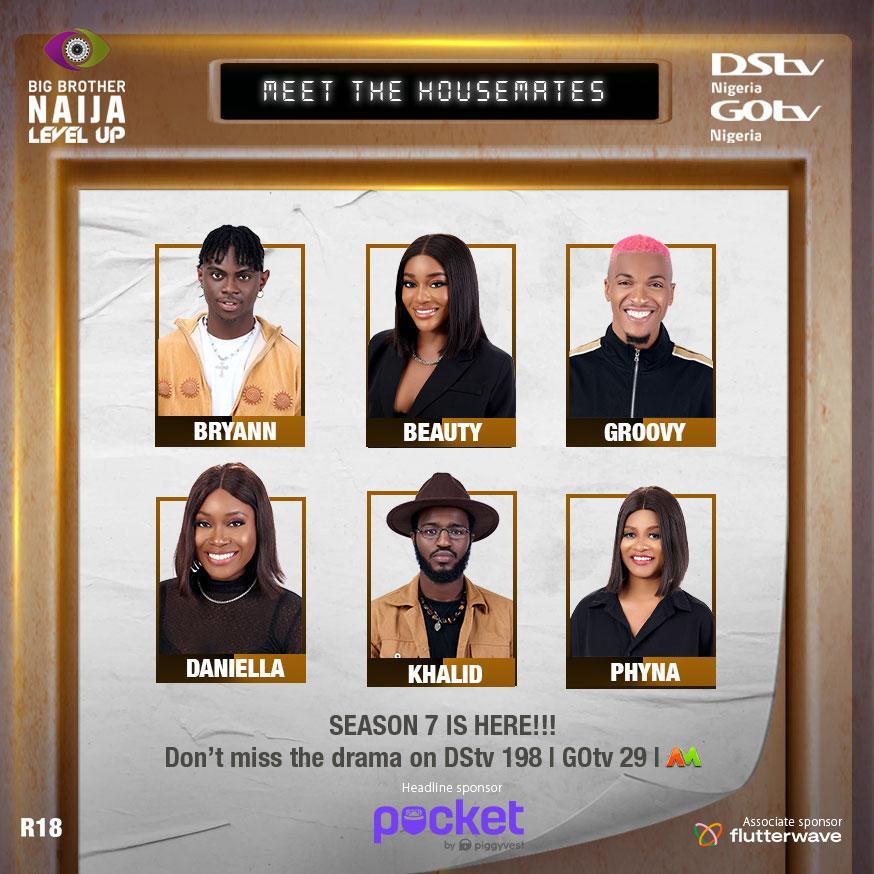 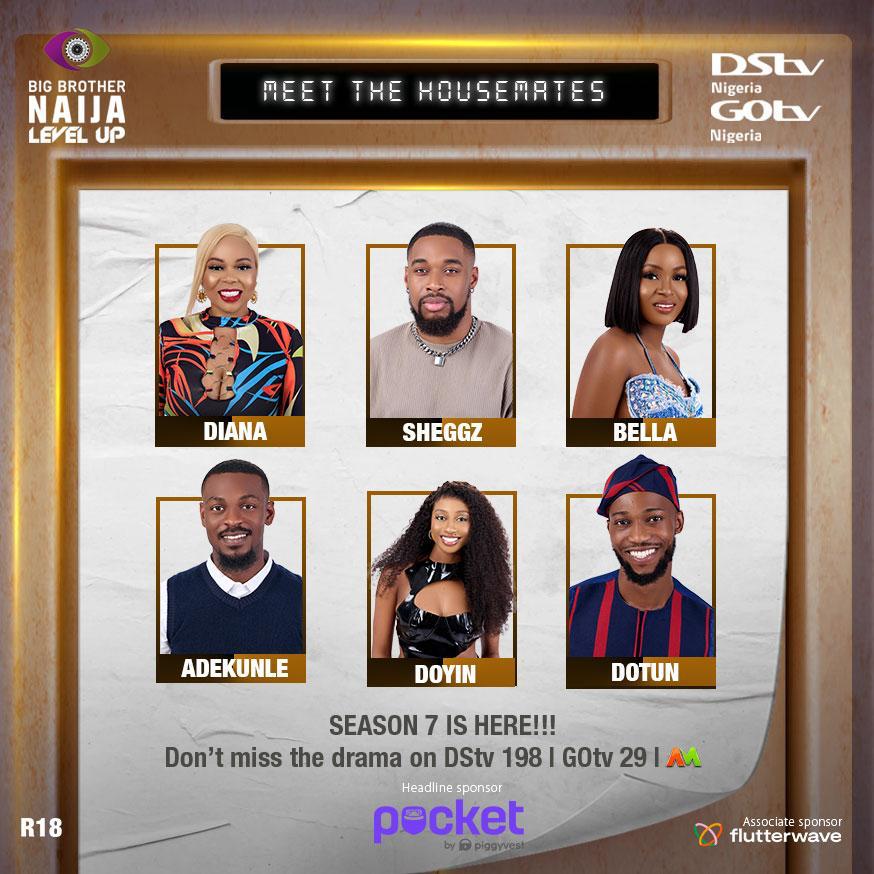 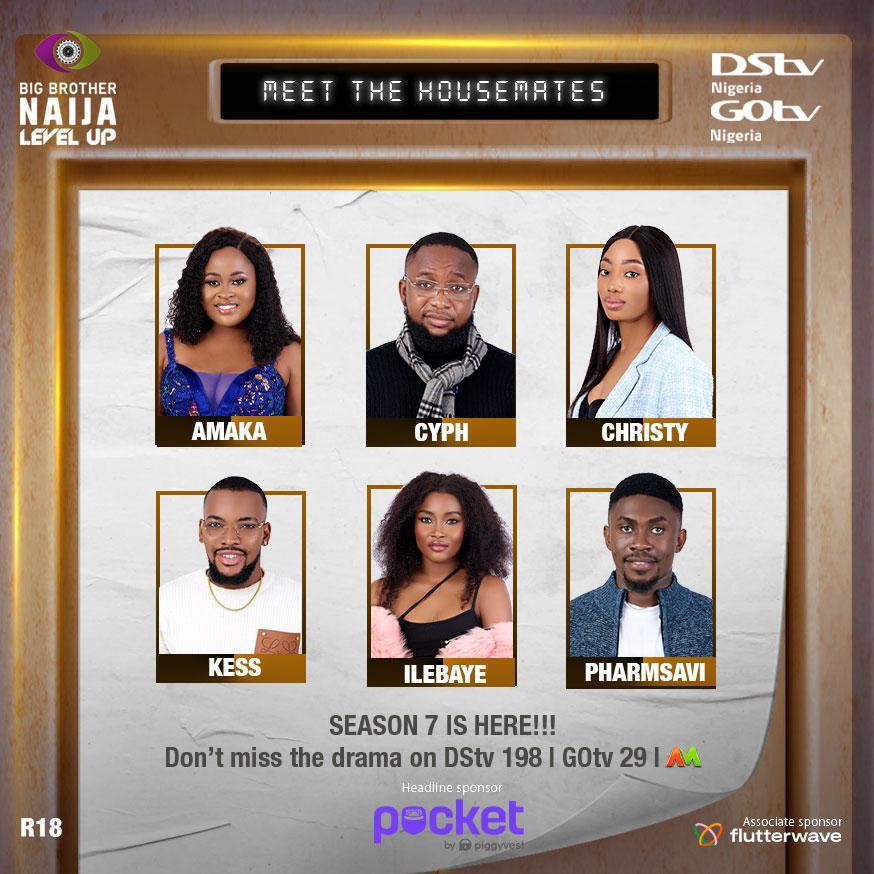 The 7th edition of BBNaija commenced on Saturday amid fanfare and excitement in a double header opening night. Twelve housemates made it into the Level Up House on the first night, while another set of twelve were introduced 24 hours later.

Level Up house consists of diverse talents and interesting personalities ready to outplay each other for the coveted prize of N100m. Here is a snip into the personality of the 24 housemates.

Groovy: Standing at 6 ft 5, Henry Olisaemeka Orakwe, was the first housemate of the Level Up edition. He has a B.Sc. in Biochemistry from the University of Lagos. A native of Anambra state, 26- year-old Groovy is a businessman, artist, and model. He described himself as ‘Heartless’ when it comes to love matters and plans to stay till the last day in the house by being as entertaining, blunt, and funny as possible.

Beauty: The second housemate in the Level Up house was Beauty Etsanyi Tukura, from Taraba State. A lawyer and former Miss Nigeria, Beauty said she’s all about high energy. She plans to take it to the next level by being her authentic self and going with the flow of things. She said the housemate would hate her for being overly expressive.

Khalid: Ismail Rukuba Ahalu, is a proud Muslim from Plateau State. 22-year-old Khalid loves basketball and skateboarding. He is a great archer and graphic designer who doesn’t love at first sight. Khalid said there might not be a ball in the house, but he is a baller. Khalid described himself as “chronically single”, and not looking for love now. He sees the Big Brother Naija house as a platform to advertise himself.

Ilebaye: A native of Kogi State, Ilebaye Odiniya is very adventurous and really going to ruffle feathers this season. She’s a criminology and security studies graduate and entrepreneur. The 21-year-old said the audience should expect a lot of controversy from her. “I’m bringing Gen Z drama,” she said.

Cyph: Bright Hidi Nwekete is a 27-year-old art lover from Imo State. He studied Electrical Engineering at Madonna University. Cyph said he believes in love at first sight but not always. He loves food, travel, fashion and cruise, and admits he can be quite enigmatic. “I’m goofy, sociable and playful too though, so that balances it out,” he said.

Amaka: Chiamaka Crystal is a health care worker from Aguata, Anambra State. Amaka said she has burnt all other bridges, and this show is the only thing she has now. She calls herself Nigerian Nicki Minaj, adding that she’s perfectly single to the last letter of the word. “I am Amaka and I will disappoint everyone who thinks a man will win this edition,” she said. Some fans already see her as an upgrade to Lucy of the Lockdown edition. Like Lucy, she also loves to cook.

Kess: Kesiena Tony Adjekpovu is a 28-year-old old married man from Delta State who loves family more than anything else. The businessman said his wife gave the go ahead to have fun in the house, and he’s ready to explore to the fullest. Describing himself, he said: “I can do almost anything. I can sing, but not on Wande Coal’s level, sha. I dance small. I sabi act small.” A married man was the first to leave the house in the last edition.

Daniella: Born with a twin brother who is an Abino, Daniella Utangbe Peters is a dark 22-year-old poet from Cross River State. Daniella said she’s sensitive and doesn’t do drama. She’s bringing love and light, as well as positive energy to the show. She loves to sleep and gist.

Pharmsavi: 27-year-old Saviour Akpan is a pharmacist and low-key entertainer from Akwa Ibom state. He loves acting and has a knack for drama which is what BBN audiences crave. He’s a lover of peace and hopes to become a professional actor. His first few hours in the house reminds one of Triky Tee of the Lock Down Edition.

Phyna: Ijeoma Josephina Otabor, is a native of Edo State. Phyna said she hates gossip and is quick to anger. Her first few hours in the house showed she could be the drama queen of the Level Up edition of BBNaija. The 25-year-old hype girl said she was born an entertainer. According to her, “Na mumu dey fall in love”.

Bryann: Brian Chukwuebuka is an artist and producer who hails from Imo State. The 24-year-old said he’s confident in his own skin, and nobody can throw him off his game. He is bringing freakish energy. “small ashawo dey my eye,” he said. Bryann released his first music album in 2021. He looks a bundle of energy and one to look out for during Friday Night parties.

Christy O: The second poet in the Level Up house is Christiana Oluwafunke Ojumi, a native of Ondo State. She’s a beauty entrepreneur and runs a cosmetics business. This outspoken 24-year-old also models in her free time and believes in giving people second chances. She describes herself as a “funny, smart and hardworking extrovert” and admits you are more than likely to find her “where the fun is” on any given day. When she’s not hiking or enjoying a picnic with her close friends, Christy O makes time to write poems. Christy O said she so much enjoys sarcasm.

Bella: Chidimma Esther Okagbue is from Anambra State. The 25-year-old content creator described herself as real and fun to be with. Bella loves the soft life and hates stress. She loves to be in her space and is bringing vibes, ginger and premium entertainment. Her best friends are of the male gender, and she hates gossip.

Eloswag: The first Head of House of Level Up BBNaija 7, Eloka Paul Nwamu is a native of Delta State resident in Lagos. The 27-year-old digital marketer and content creator described himself as “the next big thing out of Naija”. He is on the show to showcase himself and willing to learn and grow. Eloswag is single. He has been served breakfast and in no rush for a boo right now.

Doyin: Doyinsola Anuoluwapo David described herself as a Mix of Michel Obama and Cady B. Doyin, a native of Ondo State, will not hesitate to disrespect those who don’t respect her in the house. The 26-year-old promised to bring fun and vibes and ‘a little bit of “gbas gbos here and there”. Doyin is hoping Big Brother Naija will help change the direction of her life.

Adekunle: Tobilola Olopade Adekunle, from Lagos Island is a self-actualised introvert who loves solving other people’s problems. The 27-year-old is a digital marketing consultant. Adekunle described himself as God’s favourite child and said he came into the house with a little bit of trouble and Lagos Island swag. “Don’t let my English deceive you, I can be an Agbero,” he said.

Allysyn: Osy Allysyn Audu is a model, sales and marketing executive trying to make a name for herself. The 25-year-old said her ability to mix with people and get them to trust her is something that’s unique about her. She’s obsessed with lip gloss. Allysyn is currently in a relationship and promised to bring excitement and good content to viewers.

Dotun: Oladotun Mofiyinfoluwa Oloniyo is a medical physiologist and fitness freak from Ekiti State. Dotun is also a model and was crowned Mr. Tourism Nigeria 2018. The 26-year-old is bringing a dose of sexiness to the show. Dotun said he’s op inionated, confident and his aspirations is to take over the entertainment industry.

Chomzy: Esther Chioma, is a 22-year-old entrepreneur from Imo State. She described herself as kind, generous, life of the party, and a good dancer. The model said she’s single and open to love. “I want to be successful in my business and I want to find love too,” she said. Chomzy added that she’s in the house to have fun, play the game and win the money.

Giddyfia: 24-year-old engineer, Gideon Anieti Nwawo hails from Akwa Ibom State. Giddyfia described himself as a team player, who is prone to laughing and joking during serious moments. Giddyfia is bringing contagious vibes to the house. He is a fitness buff and won the 2019 ‘Male Physique of the Year’ award in college. Giddyfia is single and ready to mingle.

Diana: 33-year-old Diana Isoken Edobor is a project manager from Edo State. Diana was born in France and said she’s bringing a bit of Nigerian and French spice to the show. Diana confirms that she is single and open to relationship. She hopes to kick-start her acting career, build a network of friends and use the Big Brother Naija platform to establish her brand.

Hermes: Hermes Chibueze Iyele is a dance artiste, who loves basketball, public speaking and American flag football. He has performed some of his original dance pieces at reputable festivals in Lagos, Glasgow and Rotterdam, and has also appeared in music videos for afrobeats stars including Burna Boy, Davido and Ajebo Hustlers. Hermes is in a polyamorous relationship with two women and said no room for the third. On his plan in the house, Hermes said:” I’d like to show people just how much the love and creativity that is built in such tight living circumstances can change the world and help people grow”.

Chichi: A stripper at night and chef in the day, Chinenyenwa Desire Okoebor is a 22-year-old housemate from Edo State. She described herself as an unshakable ambitious goal-getter. Chichi said: “Exortic dancing saved my life, I’m bringing my truth and originality to the show.”

Sheggz: Segun Daniel Olusemo is a professional footballer and actor based in the U.K. He hails from Lagos, and was the last housemate into the Level Up house. Sheggz recently got injured and has taken to acting part of his life since. He described himself as confident and the perfect mix of Lagos and London. The 26-year-old is single and loves relationships, but believes it is important to find the right person. Sheggz is in the house to show that Nigerians have talent, swag, vibes, ambitious and honest.