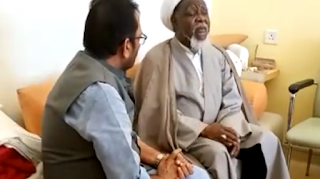 The Islamic Movement in Nigeria has described as a campaign of calumny, claims by the Federal Government that its leader, Sheikh Ibrahim Zakzaky, had wanted to seek asylum in India before his return to Nigeria last Friday.

The group said the allegation was made by the government “to cover its own gross misconduct in a foreign land.”

Responding to the issue in a statement in Abuja on Sunday, the President, Media Forum of the IMN, Ibrahim Musa, alleged that the FG went beyond its role of supervision to interfering in the medical process, dictating which doctors El-Zakzaky and his wife must see while refusing to allow them to access their own doctors at Medenta Hospital, New Delhi.

This, he said, confirmed the allegation that “the government had wanted to kill the IMN leader in the name of medical treatment.”

Musa added that before efforts at resolving the impasse could be concluded, El-Zakzaky was brought back to Nigeria, “since their evil schemes could not be executed.”

The IMN spokesman said El-Zakzaky refused to be subjected to any breach in the basic ethical principles guiding the medical treatment including respect for persons, protecting the autonomy of all people and treating them with courtesy and respecting and allowing for informed consent, which he said the FG had contracted medical personnel in the hospital to breach.

The statement read, “Being mindful of the government’s various previous plots to eliminate him since 2015, first through the barrels of the gun and much later through poisoning in detention while refusing him access to adequate medical care until the court’s intervention, the Sheikh sensed the government’s intention of inducing killer doctors to finish what they had earlier started, now through the back door.

“He therefore insisted on having the presence of the doctors that initially assessed him in Nigeria, who also worked in that hospital, failing which, he preferred to return to Nigeria.”

The sect further argued that the Shi’ite leader would not have elected to return to home if he had plans to seek asylum.It added, “It is on record that it was the Sheikh who requested to be brought back home having been denied access to his doctors and rejected the killer squad engaged to treat him instead.”