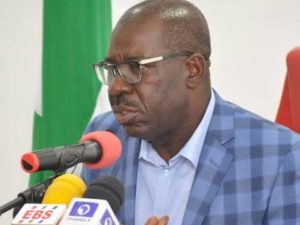 The APC National Chairman, Comrade Adams Oshiomhole, who is strongly opposed to Obaseki’s reelection, had mobilized key members of the party’s national executive as well as aggrieved chieftains of the party in the state, to thwart the embattled governor’s bid and ensure that Pastor Osagie Ize-Iyamu, the aspirant that he has propped emerges the candidate of the party for the governorship election set for September 19, 2020.

We gathered that the party’s Screening Committee, to determine their suitability or otherwise for the contest, summoned all the aspirants, who were screened between Wednesday and thursday to appear before it at the party’s national secretariat in Abuja on Friday morning.

A text message was sent to all the aspirants informing them to report at the party secretariat for the sitting of the Appeal Committee, slated to begin at 10am so that anyone disqualified who needed to seek redress would have the opportunity to do so immediately.

Those in the race are the incumbent Governor, Obaseki; a former Deputy Governor of the state, Dr. Pius Odubu; a former Secretary to the State Government (SSG), Mr. Osagie Ize-Iyamu; Mr. Chris Ogiemwonyi; Mr. Matthew Iduoriyekemwe and Mr. Osaro Obaze.

According to the report of the committee, Obaseki was disqualified on account of alleged anti-party activities.

Jonathan Ayuba, chairman of the screening committee, broke the news while presenting his report to Adams Oshiomhole, APC national chairman, at the national secretariat of the APC in Abuja on Friday.

Ayuba said two other aspirants were also disqualified from the race while three persons will slug it out for the party’s gubernatorial ticket on June 22.

The governor had allegedly filed multiple cases both at the Federal High Court and the Federal Capital Territory (FCT) High Court on Wednesday to restrain the Screening Committee from going ahead with its assignment.

However, the constitution of the APC has internal mechanisms for resolving party problems before going to court. It will amount to anti-party activities for any party member to take the party to court – a source stated.

Top party sources familiar with the plan had told THEWILL that the Screening and Appeal Committees which are expected to screen all the governorship aspirants for the election between June 10th and June 12th, will not clear Obaseki to participate in the primary.

“Comrade is not taking chances with Obaseki. He won’t let him contest in the primary election at all. He is hell bent on destroying the governor politically before he leaves his position as national chairman later this year.

“There is a plan to use the screening and appeal committees to finally shut Obaseki out of the primary contest for good. This will easily pave the way for Pastor Osagie Ize-Iyamu, his anointed candidate to emerge the APC governorship flagbearer. Obaseki is toast except Baba Buhari intervenes,” one national party leader with direct knowledge of the plot, who asked to remain anonymous, told THE CLASSIC INTERNATIONAL MAGAZINE.