The former Imo State governor, Senator Rochas Okorocha has been arrested and detained at the State Police Command on the orders of Imo State Governor, H.E. Hope Uzodinma for breaking into his Royal Spring Palm Hotels & Apartment seized by state government today, 21st February, 2021.
Okorocha was accompanied by his son-in-law, Uche Nwosu, when he broke the keys to recover the estate belonging to his wife, Nkechi.

Miffed by the ex-Governor’s action, loyalists to the State Government confronted them in a clash that left one person injured.

Imo Government on Friday had recovered the Royal Palm Estate along Akachi road.

The seizure, according to the team led by Commissioner for Lands, Enyinnaya Onuegbu, was in compliance with directive of the Imo State gazette on the report of the Judicial Commission of Enquiry on recovery of Lands and other related matters.

However, the Special Adviser to governor Uzodimma on Special Duties, Hon Chinasa Nwaneri arrived the scene with security operatives to reseal the property and a fight ensued. 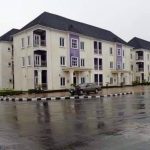