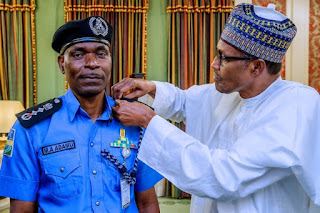 This is just as the president verbally queried the Inspector General of Police, Mohammed Adamu for failing to provide raincoats to policemen who were on duty during the commissioning.

It was at the commissioning of the 22km Fargo-Katsayal-Kwasarawa-Jirdede-Koza road, that the president noticed that policemen on duty were not wearing raincoats, even as it was drizzling,

The president then asked the most senior police officer, an AIG at the venue, “why did you leave your men in rain, without raincoats ?” Our correspondent reports that the AIG kept mum. The president now told him that he would raise the issue with the IG. Our correspondent reports that soldiers at the venue were seen in raincoats.