Samuel Chukwueze has revealed Villarreal’s target at the end of the 2019-20 season is to qualify for the Europa League.

La Liga recently restarted after its suspension since mid-March, owing to the outbreak of the coronavirus in Spain and across the world.

The Estadio de la Ceramica outfit has been impressive since the resumption of the league, clinching victories against Celta Vigo and Mallorca.

Chukwueze was one of the standout players for the Yellow Submarine as they secured a hard-fought 1-0 win at Estadio de la Ceramica on Tuesday.

The fine start has seen the Yellow Submarine move to seventh place on the league table with 44 points from 29 games, three points adrift of Getafe and Real Sociedad, who occupy the Europa League spots. 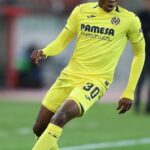 The Super Eagles star is delighted with his side’s winning run and hopes they can continue with the fine performances.

“This is just the start of the league, three months without playing, from now we are just recovering from the pandemic, I think we played well, maybe next game will be much better,” Chukwueze told La Liga TV.

“I feel so happy, more will come. We need to look forward because we want to reach the Europa League. That is our dream and target, if we keep on playing like this we will reach the Europa.”

Meanwhile, former Chelsea star Albert Ferrer has praised Chukwueze’s contribution in his side’s victory against Mallorca after setting up Carlos Bacca for the match-winning goal.

“It was a fantastic piece of skill from Samuel Chukwueze, not a nice finish from Carlos Bacca but it counted, three points,” he said.

“Again Mallorca played a good game, didn’t get anything out of it, two good games in a row, getting zero points, that’s frustrating”.

Chukwueze has made 32 appearances across all competitions for Villarreal this season, scoring four goals and providing five assists.

The highly-rated winger will hope to continue his fine showings when Villarreal take on Ramon Azeez’s Granada on Friday.
Hair That Lets You Shine – Black Hair Hub