R&B superstar singer-songwriter and World of Dance judge Ne-Yo broke down twice while struggling through an acappella rendition of “It’s So Hard to Say Goodbye to Yesterday” at George Floyd’s funeral service, held Tuesday at the Fountain of Praise Church in Floyd’s hometown of Houston. But while Ne-Yo clearly sang from the heart, remarks he made before his performance generated swift backlash online. 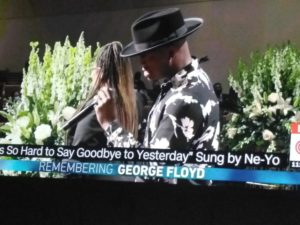 “Fifty states are protesting at the same time. This man changed the world — changed the world for the better. So, I just want to personally thank George Floyd for his sacrifice, so that my kids can be all right later on. I appreciate the sacrifice, my brother, I genuinely do,” the father of four declared, referring to how the shocking May 25 death of Floyd, a 46-year-old black man, after white Minneapolis Police Officer Derek Chauvin knelt on his neck for more than eight minutes, sparked national protests against police brutality and national conversations about systemic racism.

“It’s So Hard to Say Goodbye to Yesterday,” originally by G.C. Cameron, has become a go-to anthem of sorts in a year of mourning: Boyz II Men, who had a hit with it in 1991, performed the ballad with Alicia Keys during the opening of the 2020 Grammy Awards ceremony in tribute to Kobe Bryant, who had died in a helicopter crash that day. At Floyd’s memorial service, applause broke out the moment Ne-Yo began singing the song; this no doubt encouraged him to keep going. “God bless,” Ne-Yo said softly as he left the stage after he finished.

Here are some of the comments about his performance
@didah_learto
If Ne-Yo did not bring tears 2 your eyes🚩🚩🚩🚩🚩 u have an ice box where ur heart should be..

@TevonBlair
Ne-Yo: My momma: I think he could have done better.

@IAmRobynNicole
Watching the celebration of George Floyd’s life with tears streaming down my face after that performance by Ne-Yo. That was real.

See Robyn Harney’s other Tweets
But while many fans watching the live stream of the service were moved by Ne-Yo’s performance, many others took issue with his comments about Floyd’s “sacrifice,” criticizing the statement as inappropriate and tone-deaf, or at least poorly worded.