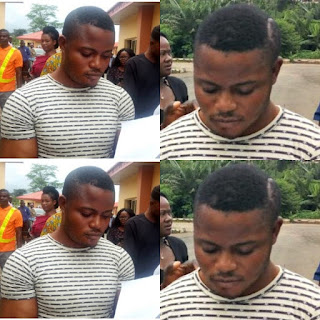 A Magistrates’ Court sitting in Akure, Ondo State, on Friday ordered  that Sunday Awolola, a soldier who allegedly raped a student of the Adekunle Ajasin University, Akungba Akoko, two weeks ago be remanded in custody.

Awolola, attached to the 32 Artillery Brigade of the Nigerian Army, Akure, was alleged to have raped the student at a military checkpoint along the Ikare Akoko-Akungba Akoko Road.

The randy soldier was said to have since been dismissed from the Nigerian Army after which he was handed over to the state police command for prosecution.

On Wednesday, the 33-year-old was arraigned on a one count of rape.

According to the prosecutor, Mr Adeoye Adesegun, the accused person “committed an offence contrary to Section 357 and punishable under Section 358 of the Criminal Code Cap 37 Vol. 1 Laws of the Ondo State of Nigeria 2006.”

At the court proceeding on Friday, the prosecutor told the court that the case file had been transferred to the Director of Public Prosecution of the Ondo State Ministry of Justice for legal advice.

Adesegun prayed the court to remand the accused person in the prison custody pending the outcome of the DPP’s legal advice on the matter.

But the defence counsel, Mr Kayode Ikotun, disagreed with the prosecutor as he asked the court to grant the accused person bail to enable him to take care of his health challenge pending the next adjournment date.

He pleaded that sending the accused person to the prison custody might aggravate his (accused) bad health condition.

However, the magistrate, Mr Mayomi Olanipekun, granted the application of the prosecutor as he ruled that Awolola be remanded in custody pending the time the legal advice of the DPP would be ready.