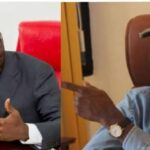 As intrigues for Edo State governoship election heightens, Mr. Andrew Momodu, a former aide and Ally of the former APC National Chairman, Adams Oshiomhole, has defected to the PDP, even as he pledged the sum of N5 million to support the re-election of Obaseki.

In another development, the Eramah Anwian of Anwain Kingdom in Etsako East LGA of Edo North, HRM Mufutairu Oare, has assured Obaseki that whatever he desires from members of the Anwain community will be doubled for him in the governorship election.

The Eramah Anwian while reassuring Obaseki of their support, said: “Mr. Governor, we are assuring you that you are at home. This community road has been a disaster for over a thousand years until your intervention. We were cut off from Edo State until you gave us a good road that integrated us back as members of the state. We cannot forget such a gesture. The government comes and goes and no government remembers that we exist. But Obaseki came and connected us back to the state through good roads.

“It took 24hours to come out from the community to the main road but today, the story is no more the same. In less than an hour, you can now approach various parts of the state due to a good network of roads.

“We are preparing a carnival to receive you on the 12th of this month but you came today, otherwise, you would have known what is called a reception of honour. Go to other areas to campaign, you don’t need to campaign in this community because this community has no other option than the PDP. Anywhere Obaseki/Shaibu stands, that’s where the entire Anwain community will stand.”

The high point of the visit to the community was the conferment of a traditional title of performance on the governor and his deputy as Ozemonya and Ozonya of Anwain Kingdom, respectively.