The current Executive Governor of Edo State, Godwin Obaseki is facing a hill of a bind as he battles to save his political life. The governor has been locked in a protracted feud with his estranged godfather, Comrade Adams Oshiomhole over matters that have no link to good governance. After months of brickbats and unending acrimony, Obaseki has joined the league of hapless APC governors who have had their 2nd term ambition hacked by their party. The setting for this repulsive development in our democratic space was Lagos State where erstwhile governor, Akinwunmi Ambode was denied a second term bid for reasons outside the precinct of good governance.
During the height of their conflict, the Edo State governor cried out that he was being persecuted by the APC national chairman for not towing the line of plunder. “I refused to share Edo State money with people who brought me to power, that’s my offence, but I will not allow Edo State to be a pawn in anybody’s political chess game”, Obaseki noted.
As the Obaseki – Oshiomhole gulf widens, it tore the state chapter of the ruling party into shreds as members loyal to both camps threw up gambits, subterfuge and political sophistry to counter themselves. Obaseki after absorbing so much tension from the APC national chairman and his men also opted to dislodge Oshiomhole from the party at the state level, a matter that is before the courts of competent jurisdiction. But it appears that the former Edo State governor while searching for an albatross that would sink his former political godson, waited for the preparation of the 2020 election to ruin Obaseki. 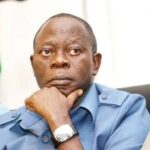 The National Working Committee established a screening committee headed by Prof. Jonathan Ayuba to screen all the aspirants ahead of the party primaries, but an Edo insider intimated Classic International Magazine that the screening committee had several predetermined mandates, one of which was to disqualify the Edo State governor on grounds of certificate irregularities.
Obaseki himself admitted after his screening that some political landmines seem to have been planted for him. “Like I said, as a party man, I have been through the screening process but I do not believe that I will get justice because Comrade Adams Oshiomhole is an interested party in the Edo process,” the governor lamented. 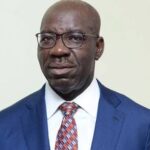 Those who are desperately opposed to the second term bid of Godwin Obaseki have gone all out to ensure that he is stopped by all means. A group of Edo indigenes had gone ahead to petition the APC screening committee through their legal counsel, Shores and Savanna International Law Firm to disqualify Obaseki on grounds of irregular certification.
In a letter captioned “Petition for Disqualification”, Edobor Williams, Ugbesia Abudu and David Anakhu represented by the law firm inferred the following: “Our clients are loyal members of the APC and are passionate about the success of the party in the forthcoming governorship election in Edo State. Arising from this, our clients conducted discreet investigations into the background of Obaseki and found him wanting.
The aforementioned petition and many other conspiracies made the disqualification of Obaseki inevitable, but the disqualification did not go down unchallenged. The former national chairman of APC, Chief John Odigie-Oyegun in his reaction to Obaseki’s disqualification said APC will suffer dire consequences in Edo State if the disqualification is not speedily reversed.
Oyegun in a statement by his public affairs adviser, Ray Morphy said, “The disqualification of Obaseki by the APC screening panel is a hatchet job aimed at installing a stooge that will allow some people unfettered access to Edo treasury. While not a surprise, the disqualification is a clear indication that internal democracy has been murdered in APC, a party which we founded on the principles of fair play and good conscience”.