Operatives of the Economic and Financial Crimes Commission, EFCC, Port Harcourt Zonal Office have arrested two suspected internet fraudsters linked to the on- going collaborative investigations between the EFCC and the Federal Bureau of Investigation, FBI. 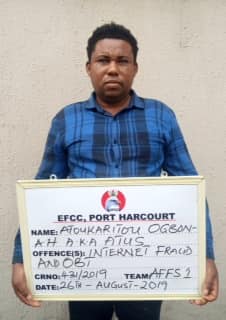 The suspects would be charged to court as soon as investigations are concluded.