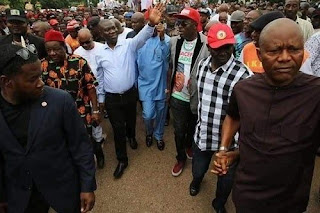 Former Deputy Senate President, Ike Ekweremadu, has returned to Nigeria to a rousing welcome 48 hours after he was attacked by members of the indigenous people of Biafra (IPOB),

He arrived at the Nnamdi Azikiwe International Airport Abuja on Monday.

The Senator told journalists at the airport that the attack is not a representation of the character of the majority of Nigerians.

He reiterated his stance that he had forgiven his attackers and would not be seeking their punishment.

Ekweremadu was billed to give a keynote address on Saturday at the Second Annual Cultural Festival and Convention organised by Ndi-Igbo Germany in Nuremberg before he was lynched.

The lawmaker was accused by IPOB members of conspiring with the Federal Government to proscribe the group in the South East and the killing of its followers.