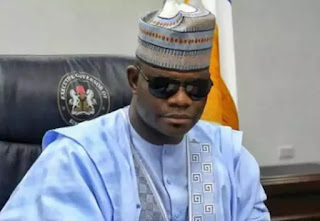 Governor Yahaya Bello of Kogi State on Wednesday reportedly caused a ten-minute traffic gridlock at Gwagwalada, along the Abuja – Lokoja Road after he stopped to spray money on passers-by.

Yahaya Bello, who was heading to Lokoja in a long convoy slowed down at Madam Mercy Junction and brought out three bundles of N500 notes and threw them out at passers-by.

It was reported that after Bello threw the money, he also wound down the glass of his side of the vehicle and flashed four fingers on both hands, the symbol of two four-year terms, a trend started by President Muhammadu Buhari when he went to present the 2019 budget at the National Assembly late last year.

He was hailed by some motor park touts at the popular Wazobia Park even as they rushed to grab their share of the money.

Some pedestrians, petty traders and even Okada riders abandoned their motorcycles and scrambled for the money.

Yahaya Bello is seeking a second term in office on the platform of the All Progressives Congress.

The Kogi State governorship election is scheduled to hold on November 16, the Independent National Electoral Commission has announced.