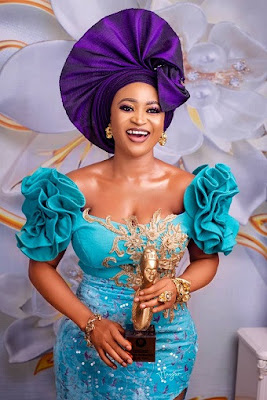 Actress, Mercy Aigbe, is regarded as one of the most fashionable celebrities in the country. Usually turned out in colourful and unique attire, Aigbe is always a sight for sore eyes on red carpets and other events.

The actress has, on several occasions, credited fashion designer and CEO of Anjy Luminee Couture, Abiodun Sandra, as the brain behind her fascinating outfits. In a chat with SATURDAY BEATS, Sandra stated that the relationship between both of them had been symbiotic, as Aigbe had made her popular and connected her with other clients.

Recalling how their paths crossed, Luminee, as she is popularly called, said, “A friend wore one of the clothes I designed and posted it on Instagram.

Mercy liked it and requested for the designer who made it. My friend introduced me to her and ever since, we have maintained a cordial relationship. She has kept supporting my brand till now and I can boldly say she gave me my breakthrough.

She made me popular and has connected me to other celebrities and clients. If anyone had told me my brand would be this big now, I wouldn’t have believed such a person. However, I believe this is God’s calling for me, especially considering that I didn’t learn it. However, I had to put in a lot of hard work so that people would accept me.”

The designer also stated that one of her biggest moments styling Aigbe was the 2016 Africa Magic Viewers’ Choice Awards where the actress was regarded as one of the best dressed persons at the event.

On how she keeps her clients happy, Luminee said, “When making clothes for celebrities, I consider their personalities and body types, and I make sure that whatever I design for them fit perfectly. I also pay attention to details because I know that as stars, whatever they wear would be under intense scrutiny, so there is no room for errors.”