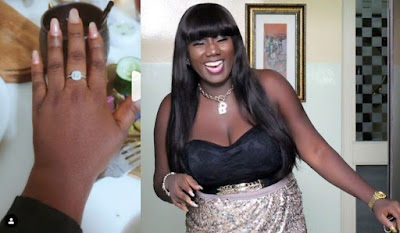 Actress, Adediwura Adesegha, aka Adediwura Gold, could not hide her excitement during the week as she announced to her fans on social media that she was engaged, 12 years after her previous union hit the rocks.

On her Instagram page, the ecstatic actress flaunted the diamond ring her man gave her. In a chat with SUNDAY SCOOP, the actress affirmed that she was excited to find love again.

She said, “Definitely, I am excited. I am happy finding love again. At some point, I thought I wouldn’t be able to cope with any man again because of the past experiences I had. I always brought my past to my present and it usually affected my relationships. The men would get tired in between, and sometimes, I just switched off. But I thank God that I am now able to scale through.”

Gold maintained that being single for 12 years had taught her some lessons that would help her in her new marriage.

She stated, “I have seen and learnt a lot; I can’t even mention all. I won’t allow what happened to me during my past marriage to occur again. While single, I had many experiences with lots of guys, and I believe that with the little knowledge I have now, nobody can tutor me on relationships again.”

Tracing the journey that led to the proposal, the busty actress told SUNDAY SCOOP that they had been in a relationship for about three years before they decided to take things to the next level.

“It has been on for about three years now but I never believed he would propose. I just felt he was somebody I liked. He helped me fight my personal battles. Being a typical Yoruba babe, I just wanted to have someone around that I could call my boyfriend. But everything later happened for good,” Gold added.