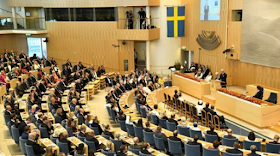 Lawmakers in Sweden have no official cars, enjoy no immunity, use public transport, and wash their own clothes themselves — in public laundries!

This is a world of difference away from what obtains in Nigeria, where lawmakers get special treatment, official vehicles, luxury and heavy running costs — which are separate from what they get as salaries.

The speaker of the house of representative also travels in crowded buses and trains. The politicians are treated as ordinary citizens. It is your choice to serve the people, nobody asked you to come out.

In an op-ed for the Mail and Guardian, Claudia Wallin, a Brazilian journalist who has been in Sweden since 2003, said this may be odd to lawmakers from other parts of the world, where senators and representatives are used to a life of luxury.

With this system, Sweden has transformed itself from “an impoverished, agricultural society into one of the wealthiest, most socially just and least corrupt countries in the world”.

According to Business Insider, an MP in Sweden earns $78,000 a year — and while this might seem like a lot, it is only “about two times more than that of an elementary school teacher” in the country.

This does not include official cars, furniture allowance, hardship allowance, welcome package, severance package, and the many more allowances hidden from the public.

When President Emmanuel Macron of France visited Sweden’s Prime Minister Stefan Löfven in 2017, both men and their officials were said to have used a public bus for one of their trips.

Politicians who dare to spend public money on taxi journeys, instead of riding the train, end up on news headlines. Even the speaker of Parliament receives a card to use the public transportation.