The President of Hazie Masters Club of Nigeria and Chief Executive Officer of Richygold Group of Companies, High Chief Richard Agbapuru has called on social clubs in Nigeria to make a paradigm shift by paying more attention towards being role models in helping the less privileged in the society. 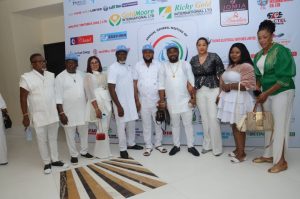 The Richygold boss who spoke with journalists at end of the year party organised by Hazie Masters Club at the high-brow Intercontinental Hotel, Victoria Island, Lagos on Saturday said social clubs should not be seen as a place to promote drunkenness or other irresponsible behaviors. 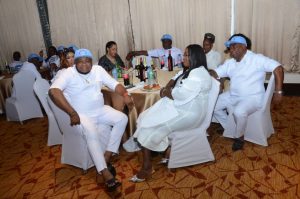 According to him “we want all other social clubs to strongly consider themselves as a platform through which many less privileged people can be empowered to earn some living. Social clubs should see themselves as real role models not in the sense of drunkenness but ensuring that people, both members and non-members are assisted.

Giving a historical background of Hazie Masters Club, Agbapuru said the body was originally founded by 22 persons and was incorporated in 2019 with the Corporate Affairs Commission (CAC) with the main objective of fostering good and cordial relationship among members and serve as platform for socio-economic interaction and networking with a view to bettering the lives and interest of members.

He added that membership of the club was open to all well meaning Nigerians citizens irrespective of tribe or religion. However, he regretted the fact that some intending members of non Igbo extraction misunderstood it to be a club for only people of the South East ostensibly due to the fact that the founding members hailed from the South East. He used the opportunity to invite non Igbos to belong to the Club.

The Hazie President who described the end of year party as quite overwhelming and exciting explained that the Vision of the founding members of Hazie is to make the Club the foremost among social clubs in Nigeria with a focus on transforming lives and building an enduring nation.

He emphasised that the mission of the Club is to galvanise members of the Club through social, cultural networking with a view to creating bonding and affinities to engender love, growth and excellence.

While expressing gratitude to the Almighty God for helping the Club to realize its principal objective of fostering oneness amongst members, High Chief Agbapuru said “one of the happiest days of this Club is today. I do not think we have had a better day than today. We have about 97 percent attendance and everyone has been in high spirit, celebrating the end of year. The joy cannot be over-emphasised.”

Speaking on the milestones of the Club in recent time, the President remarked that during the COVID-19 pandemic, members of the club did much by pulling resources together to provide for those who needed palliative. “The Club did great in sharing food items. We have been contributing individually and collectively to assist the less privileged quite often,” he explained.

With an increase in the number of members of the Club from its original 22, High Chief Agbapuru while appreciating new members encouraged them to live up to expectation with a prayer that God should enrich every member.

With no pretence on his philanthropic nature, the Richygold boss pleaded with women not to be obstacle to their husbands’ generous intentions of helping the less privileged whenever the needs arise. “It is good to give and make people happy,” he remarked.

Speaking in the same vein, a Cameroon-based member of the Club, High Chief Paulinus Chukwudi Emeka (Akusinachi I) paid tribute to the founding fathers of the Club particularly, President Richard Agbapuru whom he described as a big motivator in the art of giving.

He emphasised that it was through Agbapuru’s influence he started visiting Nigeria and participating in the Club’s activities because he was born in Cameroon, grew up there and has been living there.

In his words “since I joined the Hazie Masters Club, my life has changed in many ways. I got inspiration from members who are always willing to connect me to those who would do business with me. I am also inspired by the benevolence of members to themselves and even to non-members who need assistance particularly in getting business connection. They do not discriminate against non-members when it comes to assistance.”

Earlier at the event, a member; Mr. Anthony Onwumere had given lecture on how best to build a virile social club.

The allnight party which was organised by the Vice Chairman of the Club; High Chief Amaechi Anuma spilled over to the early hours of Sunday. It was lively in every aspect of it as there was no dull moment.

Members who were all clad in white dresses with their spouses were thrilled with old school music by the DJ as all ate and drank.

An ace comedian with the Bond FM 92.9 Elder Kelechi Ulu Torti (a.k.a. Microphone Anaconda and fondly called Great Oxygen) did a good job of anchoring the event as the Master of Ceremony. His ribs cracking jokes could not be forgotten in a hurry. He was on stage with another master of the art, Alias Kwekwe both of them gave a very account of their oratory and comic prowess.

One major highlight of the event was presentation of undisclosed cash gifts to wives of all members who were no fewer than 58 in number. The Club members similarly rewarded themselves with outstanding gifts of big size Plasma television sets to those who made more financial contributions towards a successful hosting of the event.