CHECK THE BACKGROUND OF MOST GREAT SERVANTS OF GOD DOING GREAT EXPLOIT FOR THE LORD IN THE MINISTRY TODAY, YOU WILL DISCOVER THAT THEY HAD ONCE LAID DOWN THEIR LIVES TO SERVE THE LORD, APOSTLE COURAGE IGENE, THE SENIOR PASTOR IN CHARGE OF ALL NATIONS CHURCH (AN ARMY OF JOSHUA GENERATION MINISTRIES), A RENOWNED MINISTER OF GOD WITH APOSTOLIC GIFT OF HEALING AND DELIVERANCE, AN APOSTLE TO THE NATION, AN AUTHOR OF SEVERAL BOOKS. APOSTLE IGENE IS A TYPICAL EXAMPLE OF SUCH. THE GREAT SERVANT OF GOD SHARES HIS EXPERIENCE IN MINISTRY IN THIS EXPLOSIVE INTERVIEW WITH THE CLASSIC INTERNATIONAL MAGAZINE.

HOW WAS YOUR GROWING UP LIKE?
Growing up was fine in Benin City, Nigeria. I was grateful to be planted in Assemblies of God Church where I learnt almost everything I know today. I thank God for that. Schooled in Benin and all went well. Organized lots of prayer crusades through a Ministry I had then called the Concerned Christians Prayer Ministry.

WHAT INFORMED YOUR TRIP TO THE U.S AND ARE YOU STILL PURSUING YOUR INITIAL DREAM THAT LED YOU TO TRAVEL TO THE U.S?
Coming to the U.S really helped in furthering my education and helped create opportunities to be exposed to the advanced society and this has helped me gain knowledge on a lot of issues. I’m at the center of God’s will for my life today and thats all that matters.

WHAT WOULD YOU SAY MAKES THE DIFFERENCE BETWEEN NIGERIA AND THE U.S?
The Difference is clear. One major example is that basic amenities are provided uninterrupted but the opposite is the case in Nigeria.

WHAT DID YOU SET UP TO BECOME WHILE GROWING UP AND WOULD YOU SAY YOU ARE ACHIEVING THEM?
As a child, I initially wanted to be a Police officer because I was inspired by my uncle who was then the Assistant Inspector General of Police. But later changed my mind to join politics so I can make the much needed changes in my state and nation. I got very involved in political activism and still have it in my blood till today. I have a passion to see positive changes in the political climate of the nation. We need men of integrity rise to positions of power and change the current culture of looting and pillaging of national resources. Ministry and Politics are both strong passions of mine. If I had to do something else fully outside of ministry, would be going into politics.

BEFORE THE MINISTRY, WHAT HAVE YOU BEEN DOING?
Thats all I have always done. I have worked in few places on the side. Worked at corporate offices as an administrative assistant, warehouses, menial jobs such as plumbing, cleaning, chauffeur, and lots more.

HOW DID YOU RECEIVE CHRIST AND WHAT PROMPTED YOUR SALVATION?
I received Christ after listening to a life changing message at my church at Assemblies of God Church, Benin City. Nigeria.

HOW THEN DID YOU RECEIVE THE CALL OF GOD INTO THE MINISTRY?
Been involved from the young age of 12. That’s all I ever known. That’s the only passion that consumed me. Then to begin full time ministry, God spoke to me to raise an endtime army for him which is the vision and mission statement of our ministry today and it was confirmed by many pastors and leaders. We are also envisioned to raise an End-time Army. All Nations Churches is 15 years and we are very proud of it.

APART FROM THE WORK OF GOD, WHAT ELSE DO YOU DO?
The work of God is what I do fully because I can hardly meet up with all the different aspects of the ministry which all require my attention.

IF THE WORK OF GOD FAILS YOU, WHAT WILL YOU DO?
The Work of God cannot fail! If it does, the owner of the work will fix and restore it.

SINCE WHEN YOU HAVE WORKING WITH GOD, HAVE YOU EVER THOUGHT OF BACKSLIDING FROM FAITH?
No, I have not but I have thought of giving up ministry.

ACCESSING CHRISTIANITY IN THE USA, WOULD YOU SAY CHURCHES MEET UP THEIR EXPECTATIONS?
Depends on the size of the church. Many small and growing churches haven’t had all the expectation they desire. They literally have to trust God for provision each step of the way.

WHAT DO YOU THINK IS THE PROBLEM CONFRONTING THE CHURCH?
The problem confronting the church are lack of training for leaders and workers, Doctrinal differences, Unity among the saints. 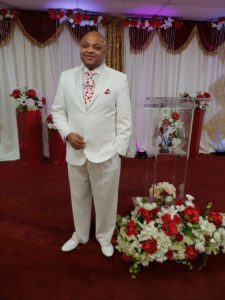 HAVE THE CHURCH BEEN ABLE TO AFFECT THE POLITICAL AND DEVELOPMENT STRUCTURE IN THE U.S?
Yes it has. The church is the reason we currently have President Donald Trump at the White House today. He got 90% of church votes.

DESPITE THE CALL FOR CHRISTIANS INTO POLITICS, THERE IS STILL LOW PARTICIPATION. WHAT DO YOU THINK IS RESPONSIBLE FOR THIS?
Reason is lack of enthusiasm and adequate knowledge of the political world. Many believe its not worth going into but with proper education and awareness, things can change.

DO YOU SUPPORT CLERICS GOING INTO POLITICS?
Yes, if they have the passion and selfless love for the people.

FOLLOWING THE TREND OF ATTACKS ON CHURCHES IN THE RECENT PAST, SOME CHRISTIANS HAVE OBSERVED THAT THERE SEEMS TO BE MORE ATTACKS ON ORTHODOX CHURCHES AND CLERGYMEN. DO YOU AGREE AND WHAT COULD BE THE REASON?
There has been heavy attacks on churches because there is a deep hatred by many against the Body of Christ. They rejoice and glory at any ugly news or scandal about the church. It started from Bible days till now.

WHAT OPTIONS ARE THERE TO STOP THE INCESSANT ATTACKS ON CHURCHES?
I believe the first thing to consider is why are there attacks? The answer is ignorance. People criticize what they don’t understand and what they understand, they destroy. The danger in doing this is putting yourself in direct confrontation against the owner of the church which is the Lord Jesus Christ. Check everyone who fought the church from Bible days till now, they don’t end well. Because you are attacking someone’s wife; we are the Bride of Christ. Not perfect but He’s perfecting us in His righteousness. The wife you married has issues, but you didn’t throw her away. You still love her. How much more Jesus! Some have made it their “calling” to attack the church everyday on social media. It’s cheapest way to get followers online… Just attack! In the Bible, When Saul was attacking the church, he really believed he was doing the will of God until God knocked him off his high horse of pride and gave him temporary blindness which led to his conversion. We need to pray for the church and for our men and women of God. Not blast them openly on social media like many Christians do everyday… they enjoy insulting fathers of the faith. Its wrong. If everyone is wrong, you can start your own church and teach us how it should be done.

HAVE YOU EVER REGRETTED BEEN A PASTOR?
I won’t use the word “regret” but I can say I have been greatly and deeply disappointed in what I have seen and experienced as a pastor.

WHAT HAS LIFE TAUGHT YOU OVER THE YEARS?
Life has taught me that everything and everyone is not as they first appear. The snake you don’t deal with in Genesis will become a dragon in Revelation.

HOW DO YOU MANAGE CRITICS?
Depends on the criticism. There are two kinds of criticism; constructive and destructive. If someone is giving me a constructive criticism, I will listen and take it. I have leaders and people everywhere who give me ideas on how to do some things differently. I always appreciate them for calling it to my attention and expressing their concerns and suggestions. I have changed many things because someone suggested except its something I heard clearly from God and something I know is in line with God’s word. But destructive criticism sees nothing good in you. Its intent is to destroy you, demean your influence and attack your credibility. Everytime they speak or write, its always an attack. Nothing constructive about it. If you notice, Jesus never spent time with his critics. Destructive criticism is a major form of distraction the enemy uses to derail you on your assignment. Many times, I ignore the destructive critics. It will be foolish of me to respond to every dog that barks, otherwise I won’t get to my destination.

WHAT HAS BEEN YOUR CHALLENGES IN MINISTRY?
My challenges are trusting the wrong people. Disappointment in those you did the most for, attack you viciously to see you are destroyed at all cost. Not having all the resources needed to accomplish certain projects as much as I desire. Some of which includes, building homes for the elderly, orphans, widows, and much more.

HOW DO YOU RELAX OUT OF YOUR BUSY SCHEDULES?
I stop everything briefly and watch an action movie. And lay down to rest a little.

WHAT IS YOUR UGLIEST MOMENT IN MINISTRY?
Ugliest moment is so sensitive; it brings back bad memories that I rather not share publicly.

THE COVID-19 PANDEMIC IS WHAT IS RAVAGING THE WORLD NOW, HOW IS THE RESPONSE IN THE US COMMUNITY WHERE YOU LIVE?
The response is great because its an unseen enemy. The nation has been on lockdown for some months but recently began to open up.

WHAT IS THE RESPONSE OF THE CHURCH LEADERS AND THE CHURCH COMMUNITY IN THE STATE YOU ARE IN THE U.S TO THE PANDEMIC?
Many of the church leaders shut down their churches and switched to online only. They are beginning to open up again. Prayers have been going up against the evil plague.

FROM WHAT YOU READ AND HINGSIGHT, WHAT WOULD YOU SAY IS THE CAUSE OF THE VIRUS?
The cause of the virus was from an experiment that went out of control in a Chinese laboratory. Spiritually, It was manipulated politically by leaders to achieve an anti christ agenda.

DO YOU SEE TRUMP WINNING THE HEART OF THE PEOPLE IN THE NEXT ELECTION GIVEN THE WAY HE HAS BEEN HANDLING THE COVID-19 PANDEMIC IN THE U.S?
It will depend on the state of the nation by election time.. everything is subject to change. People that sing “Hosanna” today can turn around tomorrow to shout “crucify him” so it depends.