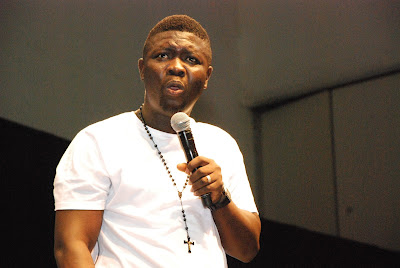 Comedian, Oluwaseyitan Lawrence, aka Seyi Law, was recently called out by a social media personality with the Instagram handle, @SamuelOtigba, who criticised the series of jokes that were shared at the comedian’s show which held last weekend at the Eko Hotel and Suites, Victoria Island, Lagos.

Otigba berated Seyi, and another comedian, Whalemouth, for centering their jokes on Busola Dakolo’s rape allegation against Pastor Biodun Fatoyinbo of COZA Church. He also accused them of body shaming plus-sized actress, Eniola Badmus. Otigba wrote on his Instagram page, “When you joke about things like rape, not from an informative/educative point of view, but for clownery, you normalise these vices and make it hard for society to take rape crimes seriously.”

However, in a chat with SATURDAY BEATS, Seyi Law explained what influenced the jokes he cracked at the event. He said, “I didn’t want to say anything to dignify his (Otigba) thoughts or opinion. Come to think of it, I did a show and performed for over 80 minutes and the only part he decided to amplify was where I responded to a heckler. Someone in the audience called me a ‘man of God’ and I said he shouldn’t so I wouldn’t ‘krest’ his daughter (who must be older than 18 years).

“I was simply trying to say that the way we dignify and call people men of God is what causes the abuse of that power. That was my thought process at the time and it was a spur of the moment response. Once someone spews sweet words or is a motivational speaker, people start calling him a man of God. That is why our kids get vulnerable to some sets of nuisances, in the name of man of God.”

The comedian also maintained that the critic was only clout-chasing because he could have reached out to him privately about his distaste for the joke. “He (Otigba) attended my show and out of the 80 minutes of my performance, picked a response that was less than one minute. Though he had access to me after the show, he decided not to call me first to get my reaction. That means he was just clout-chasing. Responding to him would be me dignifying him,” he stated.

Lawrence also called on veterans to intervene in such circumstances. He added, “I believe there’s a lot that those who are senior in the industry can do to curb these peoples’ opinions that they think they have on the comedy industry. I could send you videos of American comedians who have been vulgar and we haven’t even got to that level (in Nigeria).”