Following Napoli’s record transfer of the young forward, we take a look at other transfers of the nation’s top stars that got people talking 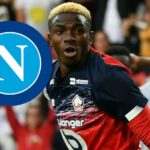 The astronomical rise of the prolific forward in the last 24 months has been immense. Having joined LOSC Lille following a successful spell at Belgian side Charleroi, the 21-year-old continued his fine form on his return to one of Europe’s top five leagues.

Osimhen was the French side’s top scorer with 13 Ligue 1 strikes in 27 games (18 in 38 in all competitions) before the top flight was halted.

Having had injuries threaten to derail his career in his time at Wolfsburg, the frontman would never have envisaged a situation where he’d be smashing the Nigerian transfer record with a move to Napoli for an initial fee of €50 million. 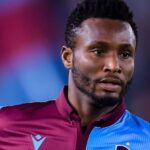 As protracted transfers go, Mikel’s move to Chelsea was controversial as they come. The midfielder had originally completed a move to Manchester United in 2005 and was pictured in the club’s strip before reneging on the decision to join the Red Devils.

After a year-long saga, which saw United report the Blues to Fifa, the West London club eventually paid the Manchester giants and Lyn Oslo £12 million and £4 million respectively in 2006.

Mikel had a long, successful career at Stamford Bridge, winning the Premier League as well as both domestic cups. He was also involved in the club’s incredible Champions League win in 2012 where he gave a man of the match performance in the success over Bayern Munich in the final. 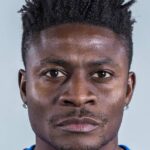 After Martins’ successful spell at Inter, Newcastle splurged on the dynamic frontman in 2006 following the retirement of the legendary Alan Shearer.

The enormity of the transfer was revealed when the Magpies named the Nigerian striker the club’s number nine, a squad number Shearer wore till he stopped playing.

While Martins enjoyed a decent debut campaign in the Premier League, scoring 11 goals in 33 league games, it seemed to go downhill from there as he failed to fill the boots of the club’s record scorer. 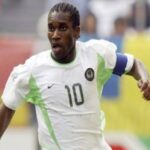 Okocha was so good at the 1998 World Cup that the French side parted with £14 million to sign him from the Turkish giants.

Having thrived at the global showpiece with the Super Eagles, particularly against Spain and Bulgaria, the playmaker was named among the six reserves of the All-Star Team of the Tournament, despite playing only three of the African giants’ four matches.

His showings at the competition made PSG part with a then-record transfer fee for an African, a remarkable sum before the turn of the millennium.

Okocha enjoyed a four-year stint with the Parisians where he and a young Ronaldinho formed a good relationship. 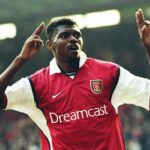 After Kanu’s huge move to Inter in 1996 following domestic and continental success with Ajax, the forward was unable to replicate his fine form in Italy largely due to a heart defect which ruled him out for over a year right after signing.

Upon his return to the side, he couldn’t cement a place in the team and left for Arsenal in 1999. In North London, the forward enjoyed a storied career, winning the double in 2001/02 and was part of the team that went unbeaten in 03/04.

Even though he wasn’t always a regular in the side, Kanu’s time at Arsenal is fondly remembered by Gooners.