By Kolawole Olayinka, Abeokuta
Ogun State Government has inaugurated the Violence Against Persons Prohibition Management Committee (VAPPMC) to protect women, the girl-child and anyone against physical, emotional, psychological and economic forms of abuse. 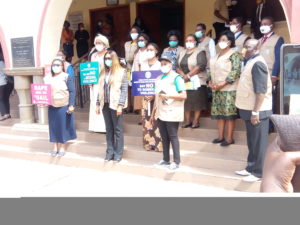 The First Lady of the State, Mrs. Bamidele Abiodun, who is also the Chairperson of the Committee, during the inauguration at Obas Complex, Oke- Mosan, Abeokuta, urged victims to feel safe in speaking up when experiencing any form of violence, saying if boys were properly educated that, violence against women or the girl-child was wickedness against humanity with attendant consequences, it would go a long way in holding them back from such acts.
Mrs. Abiodun called on the committee members to work in harmony, give adequate attention and quick response to matters concerning violence, assuring that her office would work in tandem with them in order to fight the scourge for a just society.
In her welcome address, the Commissioner for Women Affairs and Social Development, Hon. Funmi Efuwape said, violence against women remains a universal problem, adding that, not only women go through domestic violence, as men equally fall victims and her Ministry was able to produce a simplified version of the Violence Against Persons Prohibition (VAPP) Law, for easy interpretation and application, where necessary.
Giving her goodwill message, the Commissioner for Health, Dr. Tomi Coker said, 33 percent of women faces different forms of violence, promising that her office would act appropriately by providing medical and psychological support to the victims.
The Guest Lecturer, Country Director of Terres Des Hommes, Mrs. Peju Osoba said the passage of VAPP bill into law has strengthened the intervention in the area of violence, adding that though, there were many victims out there who would cover up to avoid stigmatization, associated with the violence.