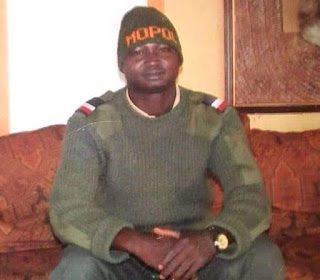 The police command in Yobe state has arrested a mobile police inspector on special duty in the state for insulting President Muhammadu Buhari, Vice President Yemi Osinbajo on his Facebook account.

Yobe state Commissioner of Police, Abdulmaliki Sunmonu, confirmed the incident, saying the Inspector has been invited to Zone 12 headquarters, Bauchi for investigation.

“Yes, he made the statements on his Facebook account. However, CP has no much conformation of disciplinary power for an inspector. Only the DIG has, so he was invited to Zonal headquarters (Zone 12) Bauchi, and AIG is investigating his case. Due process would be followed,” he said.

It was gathered that the Inspector identified as Sunday U. Japheth, of 8 Police Mobile Squadron Jos, who came to Yobe on special duty allegedly accused the Number 1 and 2 citizens of Nigeria, including the Inspector General of Police for failing the nation, threatening revenge mission on soldiers for killing police officers alongside planned police demonstration on August 14, in Maiduguri, Yobe, Adamawa and other places over their unpaid allowances. Police spokesman in Yobe, ASP Abdulmalik Abdulhafiz, described the Inspector’s write up as an apparent attempt to deceive or misinform the general public and members of the Nigeria Police Force.

In a statement made available the PPRO said: “the attention of the Commissioner of Police, Yobe State Command has been drawn to a write-up made by one Ap/No210138 Inspr. Sunday U. Japhet of Police Mobile Force number 8 squadron Jos, who is on special duty at Dapchi Bursari L.G.A via his Facebook account.

“The Yobe State Command wishes to inform the general public that only the Police Public Relations Officer (PPRO) has the right to communicate to the public through any medium about all issues affecting the Command. “It is a baseless lies that the police high command deposited the allowance of the personnel in some secret accounts in order to share the acquired interest. “It is on record that the Federal Government is operating Treasury Single Account (TSA) that made it impossible to divert any fund.

“Furthermore, all payments are directly paid into the Private Bank Account of all personnel from the office of the Accountant General of the Federation. “Lastly, the Inspector General of Police has been working assiduously to ensure the timely payment of allowances of personnel nationwide.”