Since assumption of office as the Executive Governor of Delta State, Senator Ifeanyi Okowa has rolled out several empowerment programmes aimed at alleviating poverty and empowering Deltans, especially energetic youths who form the largest swathe of Delta’s population. 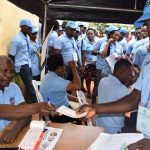 With the benefit of hindsight today, the Governor who is fondly called Ekwueme (an Igbo word which roughly means one who does not promise and fail) by his admirers is living up to the promise he made to Deltans during the electioneering period pre-2015 that he would work to empower the people and alleviate the poverty in the state. 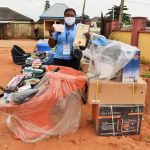 Because of Ekwueme’s desire to lift as many Deltans as possible out of poverty, he engaged the services of a University Professor, Eric Eboh, a renowned Policy Economist and Development Specialist to commence work effectively and set up Skills Training and Entrepreneurship Programme (STEP) and Youth Agricultural Entrepreneurs Programme (YAGEP).

From available records, over 27,214 graduands have been trained and established in technical, vocational and agriculture ventures.

Through the Job Creation Scheme, 6,450 unemployed youths between 2015 and 2019 have become business owners across various endeavours such as agricultural production and processing, food packaging, information, communication technology, catering, event management, beauty services, tilling, plumbing, and electrical installation among others.

Today, Delta State is replete with people who have been empowered through the poverty alleviation programmes of Ekwueme, like the STEP-YAGEP empowerment programme that has empowered millions of entrepreneurs through direct and indirect employment across the state.

Even the National Bureau of Statistics (NBS) in recent report rated Delta excellent, only second to Lagos as the least poor state in Nigeria. According to the agency, “Lagos State has 4.50 per cent poverty head count rate and closely trailed by Delta with 6.02 per cent which translates to over 82.9 million Nigerians considered as poor by national standard.”

Speaking recently, the Governor disclosed to newsmen in Asaba that his administration has created lots of jobs through huge investments in road, health and education infrastructure, while also noting that the prevailing peace in Niger Delta also impacted gainfully on the local economy.

“A lot has been done in Delta state in the last five years and the people are happy. Only recently, Delta was rated very high when it comes to the issue of reduction of poverty because we have done a lot in trying to create jobs for our people and trying to get our people engaged.

“We have done a lot in keeping the oil facilities working as it ought to be and that has greatly improved the local economy. We have, and will continue to make skill acquisition a state policy because we realised that it is the only way to get out of the unemployment conundrum that we have found ourselves as a nation.

“In the last five years, we have ensured that we redirect the minds of our youths towards skill acquisition and we give them starter-packs to enable them to stand on their own. We have also revitalised technical education in the state to give our youths more veritable platforms to acquire skills,” the governor noted.

One thing is striking from the Governor’s speech; Deltans are happy! Ekwueme is right. Several beneficiaries of the empowerment programmes of the government are happy and growing economically in leaps and bounds.

An orphan, Angela Iduh from Ika South Council said if not for the empowerment programme, it would have been very tough for her.

“To God be the glory, I have waded through because of the “bonus” from government,” she said. “With a starter pack that included a fridge, gas cooker, scale, coolers, juice mixer and the sum of N125, 000 to rent a shop, things can only get better.

“I am very happy. Before now, I used to worry a lot as an orphan, but with STEP, things are getting better. God has used the governor to empower us.”

Another beneficiary, Mr. Henry Gbogborogbo from Abraka, Ethiope East Local Council, said he was at a crossroads after obtaining a degree in Political Science from the Delta State University, Abraka, (DELSU) until the empowerment scheme came his way.

Having done so much to empower his people, many leaders in the 2nd term of their tenure like Governor Okowa would abandon their promises and even their projects for personal gains, but not Ekwueme!

Only three weeks ago, the indefatigable Ekwueme was still handing-out Starter-Packs to 2019/2020 STEP-YAGEP beneficiaries at the Events Centre, Asaba, where he assured guests and beneficiaries that his administration will remain committed to ensuring that more youths and women in the state are gainfully empowered in 2021.