At the Convocation/ Matriculation ceremony of the JPTS Institute of Management, Science & Technology which took place yesterday, President of the organisation, Professor Christopher Imumolen has called on the Nigerian authorities to reduce the stiffness surrounding the regulation of the crucial sector to allow private player inject excellence
Imumolen gave this advice while lamenting the lingering industrial action of the ASUU at the Digital Bridge Institute, Cappa, Oshodi Lagos, stressing that education is the fulcrum that carries national development and human capital enhancement, and that it should not be shut down as Nigeria is currently doing.
Expressing delight at the fact that the JPTS and its partnering international institutions have weathered the storm reasonably through strategic involvement and digitalisation which has offered a lease to Nigerian youths who would have been totally caught in the web of govt – lecturers unending faceoff.
He described as worrisome a situation where students in states like Zamfara have continued to stay out of school for three years running, buttressing that such portends danger for the youths of that state and that region, situation he juxtaposed with the ugly aftermath of the civil war after the Igbo youths could not go to school for over 3 years due to war.
Prof Imumolen pointed that digitalisation of the system and the involvement cum inclusion of young professionals in the sector will bring the seriously sought panacea and stability in Nigeria’s education sector.
Proceeding, he averred that getting education right would get the nation right, because an educated workforce or citizenry would definitely spearhead good leadership across facets, disclosing that when young and educated set of leaders whose cerebrum are intact and working take leadership, they will not allow such things as corruption and insecurity to take centre position in the nation just as is presently the case in Nigeria. 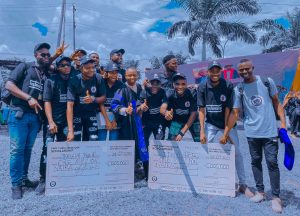 Professor Imumolen however urged the convocating students , even the matriculating ones to see the moment and opportunity as golden, tasking them to become, not just good ambassadors, but also the game changers who would make Nigeria, Africa and indeed the world better.
Two graduates of the Institute, Toha Ibrahim and Peter Ojogunwa both won one million naira each from Prof. Imumolen’s support system today for being quality youths and adding value to the system.
While admonishing the winners to be prudent, he implored others to always think of uniqueness and value.
Jubilant and grateful convocants, matriculants and their friends and we’ll – wishers littered the expansive ground of the event.
The JPTS educational opportunities are sandwiched between layers of scholarship and has been on for about two decades.
It has offered scholarships to over 500,000 Nigerians and has continued to ensure unique human capital development by offering international certifications through partnering institutions spread in three continents, Africa, North and South America, through credit transfer and evaluation.
Professor Christopher Imumolen is the Presidential candidate of Accord, the youngest in the race and arguably the most educated.
He is also the only one offering meaningful solution with his electioneering campaigns which will take vigorous effect from the 28th of September.