Russian – Ukraine war has seen a lot of condemnation from well meaning people around the world. Many people have questioned the rationale behind Russian invasion in Ukraine. In line with this, Apostle Courage Igene, the US based Pastor of All Nations Church, Dallas Texas has condemned in the strongest terms the action of the Russian president, Vladimir Putin and described it as the height of political rascality. 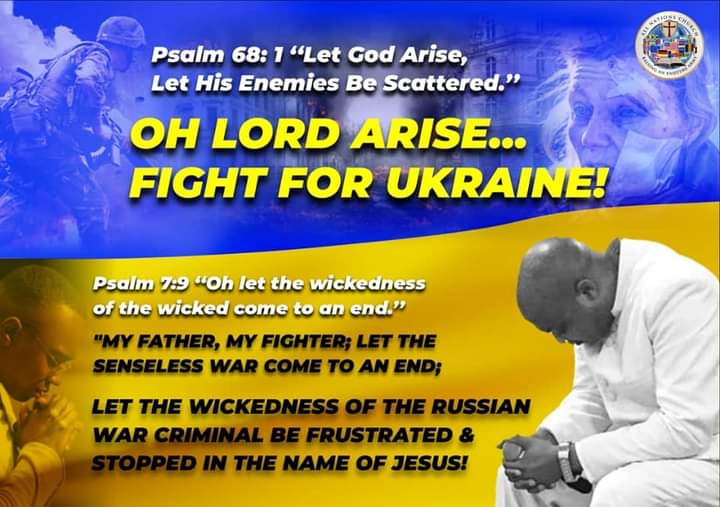 Apostle Courage said, “The Russia/Ukraine war is very unfortunate. The war was unprovoked and unnecessary. This is usually what happens when tyrants and dictators are not held accountable.”

He said that Putin is becoming a bully and the world should take note, he added “The Russian bully simply believes he can invade a sovereign nation because he has overwhelming weaponry over them…This is a case like the biblical story of David and Goliath. Ukraine is “David” while Russia is “Goliath”

The Man of God reiterated that the prayers of people have protected the Ukrainians from annihilation.

Apostle Courage opined that “Right now, due to the incessant, continuous prayers of the saints worldwide for Ukraine and the support of NATO & Western Nations, the tanks of the Russian aggressor have been restrained.”

He also commended the Ukrainians for their courage and resistance that they have put up. In his words “They were met with an unbelievable fierce resistance by the Ukrainians; this is what happens when God fights for someone. A nation where its citizens where using molotov cocktails to fight a high powered war tanks and using their bare bodies to block the tanks from advancing.”

“A large number of the Russian Army are greatly disillusioned and are saying they do not understand the purpose of the senseless war they were asked to fight.”

Apostle Courage said that he is of the opinion that there should be peace in Eastern Europe and there should also be cessation of hostilities.

Praying and interceding for God to arise and fight for Ukraine. His prayers are “Oh Lord, let the senseless war come to an end… Let the wickedness of the Russian War Criminal be fustrated and stopped in the name of Jesus.

He concluded by saying “We hereby call on the russian army in Ukraine to lay down their arms and return to their home country. This is not a cause worth dying for.” Courage added.