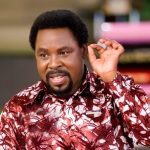 The Lagos State Governor, Mr. Babajide Sanwo-Olu has expressed sadness over the death of televangelist, Prophet Temitope Balogun Joshua, who died on Saturday at 57.

Governor Sanwo-Olu in a statement issued by his Chief Press Secretary, Mr. Gboyega Akosile, said the death of the founder of The Synagogue, Church of All Nations, a Christian megachurch that runs the Emmanuel TV television station, was painful.

He urged the deceased family, friends, associates and entire members of The Synagogue Church of Nations as well as people and Government of Ondo State to take the death of Prophet T.B Joshua in good faith.

Governor Sanwo-Olu said: “no doubt the death of a loved one is usually painful as it is irreparable but we must always take solace in God, especially if the deceased had lived a good life, just like Prophet T.B Joshua who impacted people within and outside the shores of Nigeria positively”

He said: “The pastoral, wise counsel and philanthropic gestures of Prophet T.B Joshua will be sorely missed by his family, the less privileged and the entire members of The Synagogue Church of Nations, especially in Ikotun axis of Lagos State, where he played active roles as a cleric and philanthropist before he passed on.

“I sympathise with his family, friends, associates, widow of the deceased and the entire members of The Synagogue Church of Nations and the Ondo State Government. I pray that God will grant the late Prophet T.B Joshua eternal rest and grant the family the fortitude to bear the irreparable loss.”