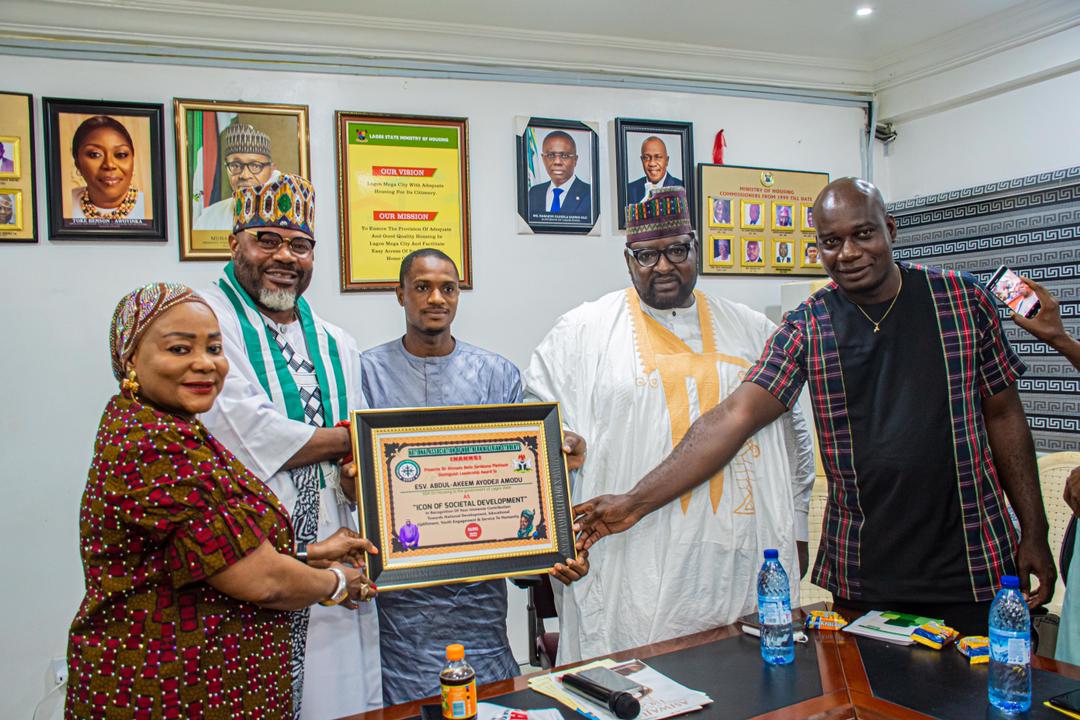 National Association of Northern Nigerian Students (NANNS) recently awarded Governor Babajide Olusola Sanwo-Olu Senior Special assistant on housing Esv. Abul- Akeem Ayodeji Amodu  An icon of societal development.
The coalition of Nigeria Northern Students gave the award to him at the Conference hall of the Ministry of housing which was attended by top ministry officials including the permanent secretary of the Ministry of housing, Director of procurement of the Ministry and Mrs Olayinka Ajayi ESV, professional colleagues and other political associate from Alimosho,Agege etc were in attendance.
During the presentation of the award the student leader comrade Hassan Ismaila from Bayero University,Kano expressed the good virtues of the awardee praised his high level of integrity and responsibility. He said Amodu’s name has been on the lips of lagosian since he was appointed as SSA due to his humility and hardworking which make him to earn their nomination.
Abdul- Akeem Ayodeji Amodu, SSA housing to a performing governor of lagos state, while receiving the unique award dedicated the award to his boss governor Sanwo-Olu for giving him the opportunity to serve,he says that the reward of hardworking is more work. Promised to rededicate himself to serve  Governor Sanwo-Olu more whom he described has performing Governor.
Abdul- Akeem also dedicated the cherish award to All progressive Congress, (APC) Presidential candidate Asiwaju Bola Ahmed Tinubu for his dogdness in given lagos state master development plan which subsquent government after him have been following.
He was equally expressed his gratitude and gratefulness to the organiser of the award for doing thorough job without any influence from any quarter.
National coordinator of Tinubu support organisation  (T.S.O) Alh.Aminu Suliaman also graced the occasion, he praised awardee for his steadfastness and humility, he said it was a well deserved award. Alh Aminu urges the awardee not to rest on his oars.