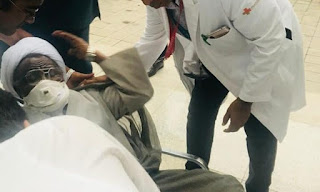 The Islamic Movement in Nigeria (IMN), popularly known as Shittes, on Friday said it members will commenced the suspended protest until their leader Sheikh Ibrahim El-Zakzaky and his wife who are in custody of the Department of State Services (DSS) are given proper treatment and freed.

El-Zakzaky and wife arrived aboard an Ethiopian Airline by noon on Friday at the Nnamdi Azikwe International Airport and were immediately taken away by the security operatives.

IMN refuted the claims by the Federal Government that the Shi’ite leaders rejected medical attention in India.

A statement by the President Media Forum of IMN, Ibrahim Musa said: “It is glaringly clear that the Nigerian government had an ULTERIOR MOTIVE it was nursing using its connections in India when it violated court order and interfered with the procedures of the Sheikh’s treatment. This can also be deduced from the way the security agents whisked him away to unknown destination after arrival at Abuja International airport, without allowing him to have audience with the journalists that were waiting for his arrival.

“The Islamic Movement will however continue its struggle to ensure that our leader gets the appropriate medical treatment he deserves as ordered by the Kaduna High court. And as we continue with the struggle, we wish to reiterate our call for the federal government to comply with an earlier Abuja high court that has freed him since 2016. We believe obedience to this court order will finally solve the crisis that has been lingering since the Zaria genocide of December 2015.

“As our leader Sheikh Ibraheem Zakzaky has landed safely at Nnamdi Azikwe International Airport today, we wish to set the records straight in order to disabuse the minds of Nigerians from the false claims perpetrated in some sponsored stories and articles in the media concerning his aborted medical treatment in India.

“However before we do that, we vehemently condemn the way the security agents whisked him away upon arrival without allowing the multitude of journalists that were waiting for him for hours to have a chat with him. We urge the security agency holding him hostage to declare to the public where they are keeping him in the country.