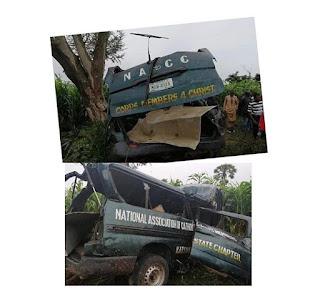 2 Corpers have died In an accident In Katsina.The serving corps members met their death while going for a wedding in Funtua

A break failure, occasioned by heavy downpour, led to the accident in which other passengers sustained various injuries

It was a massive strike of tragedy on Sunday, August 18, as two serving members of the National Youth Service Corps (NYSC) died in a ghastly motor accident that occurred in Katsina state.

The accident, which happened in Gobirawa village along Katsina–Kankara road, claimed the lives of the corps members who were travelling with their colleagues for a wedding at a Catholic church in Funtua, Channels TV reports.

Legit.ng gathers that the vehicle conveying the corps member bore the inscription ‘Corpers For Christ, and it somersaulted following a break failure occasioned heavy downpour.

The deceased were said to hail from Akwa Ibom and Anambra states, and their death has sent cold water into the spine of the scheme and nation as a whole.