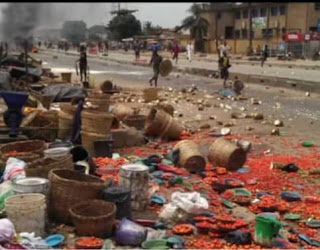 Two persons were feared killed and many others injured on Sunday as Yoruba and Hausa traders clashed at the Ilepo Market in the Oke Odo area of Lagos State.

It was gathered that a Hausa porter, popularly known as Alabo or Bolar boy, mistakenly hit a Yoruba man with the tray he was using to convey goods for traders.

The disagreement was said to have degenerated into a fight between the duo.

Soon, hoodlums from both ethnic groups took over the fight, which turned to a free-for-all.

Policemen from the Oke Odo Division deployed in the area were reported to have shot in the air to disperse the hoodlums and bullets hit one of the Bolar boys.

Angered by the development, the Hausa mobilised and stormed the Ilepo Market with stones, bottles and arrows, looting goods and injuring people.

The Yoruba were said to have assembled at a side of the road, as the two groups blocked the Lagos-Abeokuta Expressway and attacked one another.

Police teams consisting of the Rapid Response Squad, Lagos State Task Force on Environment and Sanitation (Enforcement) Unit and Mobile Police, later calmed the situation and restored traffic flow, which had been stalled by the affray.

Broken bottles, tomatoes, pepper, oil and tubers of yam littered the expressway, as many traders lamented their losses estimated at millions of naira.

The shanties, also called Bolar, are outside the market fence and close to the refuse dump.

There was heavy security presence in the area, with Armoured Personnel Carriers and police vans mounted in strategic junctions, while armed cops patrolled the flashpoints.

An official of the market, Shina Omotosho, told our correspondent that the fight started around 10am.

He said, “A Yoruba boy and one Alabo (Hausa porter) ran into each other and the Alabo fell down. They fought and the dispute was resolved.

“Some of the Bolar boys suddenly rushed into the market and tried to take the Yoruba boy to their Bolar to deal with him. The boy, however, escaped. They immediately ran into the market with arrows and knives. At that point, we reported to the police.”

Another official, who briefed a police team consisting of the task force chairman, Mr Yinka Egbeyemi, said the fight escalated after police intervention.

“The police team shot in the air, but a stray bullet hit one of the Hausa boys. They became angry and that was how the fight escalated. The Hausa came out in large numbers and many people were injured,” he said.

A roadside trader, Taiwo Shodimu, claimed that some of the Hausa boys destroyed her goods.

“The scuffle started inside the market before it spilled onto the road, where we are trading. The Hausa were many and had assorted weapons. Like other traders, I fled when I saw them. They destroyed my cartons of fish valued at N100,000,” she said.

Two of the Hausa, who spoke to our correspondent, said two of their colleagues were killed during the clash.

In the evening, some of the markets leaders, council and government officials and some witnesses converged on the Ilepo Police Station as the Divisional Police Officer held a meeting to resolve the dispute.

The Hausa, who spoke first through an interpreter, alleged that the police shot at them on purpose.

“Three policemen followed some area boys to the Bolar. The area boys had petrol bottle inside their pockets. We allowed them to come into the Bolar, because we saw that they were with the police. But the policemen shot at the Hausa, while the Yoruba set our houses on fire,” their witness said.

The DPO demanded the identity of the policemen who went to the scene, but there was silence.

A trader, who spoke for the market, said the Hausa refused all entreaties to settle the case, because of the infiltration of strange elements in their midst.

The Police Public Relations Officer, DSP Bala Elkana, denied that anybody died in the clash, adding that four persons were injured.

He said, “On August 18, 2019, around 10am, one Alhaji Adekunle Habib reported at the Oke Odo Police Station that there was a misunderstanding between one Hausa scavenger and a Yoruba area boy.

“The area boy was carrying some goods on his head and was pushed by the Hausa boy in error and the goods fell. Arguments ensued between the two parties, which led to the exchange of blows. Friends of the two joined in solidarity and other miscreants took advantage of the moment to steal and loot.

“They blocked the Lagos-Abeokuta Expressway. What started as a fight between two miscreants almost snowballed into ethnic crises, if not for the timely intervention of the police. The situation was brought under control and the blockade cleared.”

He added that the five suspects arrested would be charged.