In 1999, the former Nigeria international arrived in Westphalia to great expectation, but failed to make a mark in Germany and left under a cloud

When, in 1999, Borussia Dortmund paid 6.6 million euros to AS Monaco for the services of striker Victor Ikpeba, there were convinced they had made a steal.

BVB are much lauded in the present day for their dealings in the transfer market under sporting director Michael Zorc, but at the time he was a lot less experienced in the role. When the club sought an alternative to their first-choice transfer target Paulo Sergio, for whom bitter rivals Bayern Munich had gazumped them, they decided it was necessary to make a splash and detailed him accordingly. 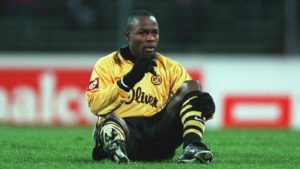 At 26, the whippet of a forward was entering the nominal peak of a career that had already seen him headline European campaigns while in France: he had led Monaco to the semi-final of the Uefa Cup in the 1996/97 season, finishing only behind Maurizio Ganz in the scoring stakes; a year later, they repeated the trick, but that time in the Champions League. He had also been a pivotal part of Nigeria’s victory in the men’s football event at the 1996 Olympic Games, scoring in the astonishing semi-final comeback against Brazil.

Clearly there was reason to be bullish. “We will see who bought the better striker,” Dortmund club president Gerd Niebaum sneered, throwing down the gauntlet to Bayern. 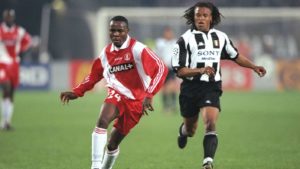 Yet, for all Ikpeba’s obvious qualities – his tremendous speed, his predatory instincts inside the box (even at 5 ft 9 inch he still scored more than his fair share of headers) and his ability to also feature out wide – there was also reason for caution.

For one thing, there was the player’s latent combustibility.

Just as explosive off the pitch as on it, the Benin native was given to outspokenness almost to a fault. It was an impolitic streak not even a spell under Arsene Wenger in his early days in France had quelled, and it was exacerbated by the sense he walked around with a chip perpetually on his shoulder.

This manifested quite frequently in his international career.

At the World Cup in 1998, he famously called out his team-mates for exerting undue influence on matters of squad selection (what that means in light of the fact he then went on to start the first two games is intriguing to contemplate, of course), and then he stuck in the knife following the shock Round of 16 elimination at the hands of Denmark, earning himself a suspension from the national side.

There was also the fact that industrial Dortmund presented very differently to Monaco.

The story of Ikpeba’s wife, now deceased, locking him in the house to prevent him joining Serie A Reggiana may be apocryphal to a degree, but it illustrates an important point: six years in swanky Monaco is a difficult experience to leave behind. Not even the presence at BVB of compatriot Sunday Oliseh, whom he had previously played alongside in Belgium, would make it easier.

Ikpeba’s time in Germany began quite inauspiciously. In the likes of Thomas Hassler and Stephane Chapuisat, the club had lost some important players that summer, and so what followed was a season of toil under already unpopular young manager Michael Skibbe, whose affiliation with rivals Schalke was always viewed with suspicion by the home fans.

Despite a great start that saw Borussia Dortmund go top after seven games, by February, Skibbe was sacked as coach with the club in sixth and following one win in 10 games.

For his part, Ikpeba was wrestling with personal issues that would contribute to a lacklustre time in Westphalia: in a Uefa Cup match in December, he was the target of racial abuse from Rangers captain Lorenzo Amoruso, and his wife was battling breast cancer.

There were also customary run-ins with authority, as he fell out with Skibbe, accusing the coach of wanting to ruin his career (a comment for which he was fined by the club); described his decision to join the club as a “big mistake”; accused his team-mates of being motivated solely by money in an interview with Bild; and also alleged he had been the victim of racial profiling during a routine traffic stop.

The upshot of these was that Ikpeba managed a measly two goals in his first season with Borussia Dortmund, and the club suffered for his lack of impact, finishing just five points clear of the relegation zone in the final reckoning.

The second season was even worse for him. His ailing wife had passed away in May 2000, leaving him “completely depressed at the time, sometimes not available” according to team manager Michael Meier.

This did not sit well with new manager Mathias Sammer, who ostracized him, much to the player’s chagrin.

“I have no idea why they don’t think I fit in. I cannot understand it,” he said. “I have not been allowed to grow at BVB.”

This public criticism further angered the club’s hierarchy, leading sporting director Zorc to despair of his continued stay in Dortmund. “We can’t continue like this,” he told Kicker. “[Ikpeba] should come up with a club with which we can negotiate.”

Despite interest from the Premier League in the form of Southampton, in August 2001 the striker moved on a season-long loan to Spanish side Real Betis, but despite his initial enthusiasm at the prospect of “starting afresh” in Spain, Ikpeba’s time in Andalusia did not go much better. He only managed three appearances in total, was accused by manager Juande Ramos of being overweight and ended up taking the club to court over a pay dispute.

He terminated his Dortmund contract in 2002, electing to join Libyan side Al Ittihad aged just 29.

In the end, his spell in German football proved deeply underwhelming, but it was shaped greatly by the bereavement he suffered. In that sense, he could be considered a victim, but even then it was ultimately his lack of diplomacy that meant he got little sympathy at the club, and so wasted what could and should have been an impressive peak.
Credit: Solace Chukwu