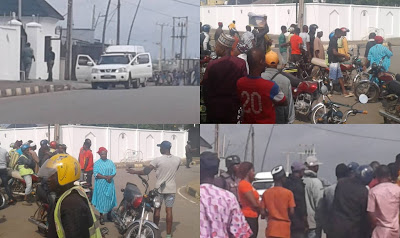 Three lawyers who claimed to have witnessed EFCC’s raid on the Epe residence of former Governor Akinwunmi Ambode on Tuesday, alleged that they stopped the anti-graft officials from “planting foreign currency” in the house.

The lawyers — Fatai Adebanjo, Busari Olanrewaju and Samson Okuneye — in a joint statement on Tuesday, said operatives of the Economic and Financial Crimes Commission wanted to stop them (lawyers) from being a part of the search.

They said the operatives allowed them into the house after they had engaged them in arguments.

The counsels added that the EFCC officers seized their phones before the tour of the house began.

In the statement, the lawyers said, “Before they entered, we searched all the officials of the EFCC who intended to go in for the search.

“There was a blue bag which they were holding with them.

“We requested to see the content of the bag before they could take it in.

“They got angry and said we could not see the content.

“Having said that, we strongly resisted them from taking it in since they would not allow us to see it; they later agreed.

“We later got to know that the bag contained foreign currency which they brought to plant in the house of the ex-governor to incriminate him.”

The lawyers noted that the operatives, while collecting their phones, had insisted that only one of their (EFCC) men would record the process with a phone.

They claimed that in the end, nothing incriminating was found in Ambode’s house except some documents, including the State Executive Exco Meetings Volumes 1-16.

The counsel explained that the anti-graft officers were stopped from taking the documents away because they refused to take records of the items.

“We followed them as they entered from one place to the other.

“When our presence was intimidating them, they said we should sit down while they do the search.

“We insisted that we must follow them to observe every of their activities on the premises.

“To our greatest consternation, the officials of the EFCC, led by Rotimi Oyedepo, Esq, held on to our phones and told us to follow them to their office in Ikoyi to get our phones.

“All efforts to get back our phones were abortive, as the officials rushed into their white Hiace bus with our phones and instructed that since we had resisted their efforts to take the said blue bag into the main premises of the ex-governor, they would hold on to the phones.

The lawyers claimed that their presence throughout the search stopped the EFCC from incriminating Ambode “with the blue bag they brought with them from an unknown destination.”

They said they were ready to challenge the legality of the search on the residence.

Leader of the EFCC operatives, Oyedepo, when contacted said the Commission would “resolve the matter” and issue a formal statement on the allegation.

“But I want to assure you that nothing like that happened,” Rotimi Oyedepo said.